[Exclusive] Interview with Kevin C. Neece, Author of "The Gospel According to Star Trek"

Author and speaker Kevin C. Neece is the creator of the ambitious project "The Gospel According to Star Trek", in which he intends, in a series of five books, to analyze the interlocutions between Star Trek and Christianity.

The first book, The Gospel According to Star Trek: The Original Crew, has already been published, and investigates these interactions in the Original Series, the Animated Series, and the original crew films, up to and including Star Trek Beyond. Volume 2, dedicated to the New Generation, is due to be published in late 2017 or early 2018.

Neece owns a blog where he writes regularly on these topics. And on his website, when you sign up to receive his newsletter, you will receive a free pdf of the first few chapters of the book, which discuss the worldview of Gene Roddenberry. We recommend! After all, this is a rather peculiar approach to Star Trek, which should certainly interest fans.

Check out the interview.

For many fans, Star Trek shows us a future where humanity would have overcome the need for a religion. What relationship do you establish between Star Trek and Christianity?

In Star Trek's future, religion has largely fallen out of favor on Earth, but that's not to say it doesn't exist. There are some references to human religion, especially in the Original Series, which occasionally mentions that humans hold "many beliefs" of a spiritual or religious nature. Of course, there are also many alien religions--both those that are beneficial and respected and those that are domineering and unjust. Since aliens stand in for different types of humans in Star Trek, it seems reasonable to conclude that Star Trek can, through alien cultures, illustrate both positive and negative aspects of human religion.

The connections I see between Star Trek and my own Christian worldview have largely to do with the philosophical parity between the two. Most Christians see Star Trek's humanism and assume it must be anti-Christian. While it's true that Gene Roddenberry rejected his Christian background, it was his family's church that provided much of his moral formation and the humanism of Star Trek can help us see the image of God in which we are created and strive to be more fully engaged with our own humanity. 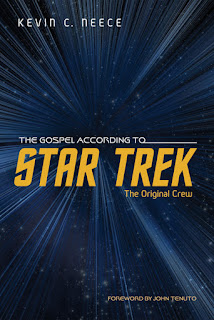 In Star Trek, the three great monotheistic religions seem to have no followers. How is the faith of the characters in the future shown by the series?

There is very little discussion of the religious associations of any human Star Trek characters, though there are glimmers here and there of Christian or Jewish influences. One Original Series crew member in a particular episode even wears a bindi, possibly indicating that she is Hindu. I think Star Trek's attitude toward religion overall is best reflected in Captain Jonathan Archer's words in an episode of Enterprise, "I try to keep an open mind."

Interestingly, Star Trek's most popular (and some would say most central) character, Spock, is also one of its most religious. His devotion to Logic is truly a spiritual discipline that involves meditation and ritual. Vulcan culture has (and would seem to be ruled by) a priestly class and Spock is, in many ways, modeled after monks. He is also the only core character who seems to definitely have a soul, as his katra, to which his father refers as his "living spirit," must be returned to his body in Star Trek III. Other characters like Kira, Chakotay, and Worf have clear religious beliefs, while Data goes on his own spiritual journey as he develops, referring once to having had a "crisis of the spirit." There are many other examples of characters, whether they are expressly religious or not, having spiritual beliefs and practices.

The DS9 series seems to be the one that has the theme religion more present, almost like central aspect, to treat of the faith of the Bajorians and of the Celestial Temple. What differences and similarities do you point between the worship of Prophets and today's religions, especially Christianity?

The Bajoran religion is interesting in that it is polytheistic, having in that sense more in common with Hinduism that Christianity. Its diaspora and the Cardassian occupation also reflect Jewish history. Its religious structures, on the other hand, are similar to the Catholic church and its internal divisions recall for me Catholic/Protestant divide. Where it most reflects Christianity, though, is in its Emissary, Benjamin Sisko, who becomes a very intentional Christ figure over the course of the series.

This is not intended, of course, to preach the gospel, but like the other unintentional Christ figures in Star Trek (Spock and Data, most notably), Sisko's journey contains many parallels with Christology and is surprisingly rich in that regard. I'll be covering this in my forthcoming book on DS9, but for now your readers can find a brief analysis on my blog archive (http://www.kevincneece.com/benjamin-sisko-as-a-christ-figure.html).

Star Trek V is a highly criticized movie, although it is one of my favorites. In it the theme of the search for God is one of the main arguments. How do you analyze that story from a Christian perspective?

It's odd to me that humans in the film identify the god entity's planet as "Eden," since Eden was a place on Earth. It's equally odd to me than anyone who would believe in Eden would believe they could find God on a planet, since God could never be so contained. Granted, the outward journeys in Star Trek are often metaphors for inward journeys. So we could simply look at it less literally as a journey of faith.

In my chapter on Star Trek V in the Original Crew book, I primarily focus on the conversation that takes place on the planet between Sybok, Kirk, Spock, McCoy, and the entity. In particular, I discuss how each time they speak to the entity, they evaluate it against an aspect of God. Shouldn't he be all-knowing? Shouldn't he be all-powerful? Shouldn't he be loving? Each time the entity doesn't measure up, it can be inferred that God, to be God, must meet those requirements. So, far from an atheistic statement, the film (like the series) engages in an important Christian practice called iconoclasm, the tearing down of a false god. The alternative God, which Kirk locates in "the human heart," does meet those requirements and is revealed in Scripture.

You can find out more about The Gospel According to Star Trek and book Kevin to speak on his website, http://kevincneece.com