""I don't like too much violence. I refuse to have the future run by the United States of America because I don't think that's the way it will be. I refuse to have an all lily-white, Anglo-Saxon crew. And I think if they had said, 'This ship has to be an instrument of the CIA of the future, of keeping the galaxies safe for democracy,' I certainly would have said, 'You can shelve the whole project."" (from "RODDENBERRY: The Man Who Created Star Trek (English Edition)" by James Van Hise) 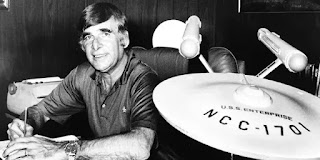